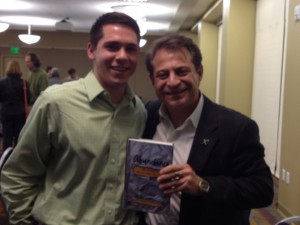 “He has founded over 15 companies.”

“The only thing you cared about was within a day’s walk.”

“Nothing is more important to us than survival.”

“Your mind will focus in on the negative stories.”

“Every generation thinks it’s the last.”

“Here are some of the facts.”

“We set new higher and higher standards and expectations.”

“We keep on raising that poverty line.”

“Something should strike you: how smooth the curve is.”

“The winning of Watson was an epic event.”

“democratizing the power to change the world”

“Technology is a resource liberating force.”

“… until a technology came along.”

“Perhaps they’re not scare, perhaps they just need the right technology to make them available.”

“That’s just one way that technologies are coming online.”

“These devices are coming on faster and faster.”

“On these devices come a multitude of abilities.”

“The quickest way to reduce population explosion is make that population healthy and educated.”

“Imagine an AI on the cloud.”

“We’re at the knee of the curve in Internet connection penetration.”

“the intense capacity for invention” 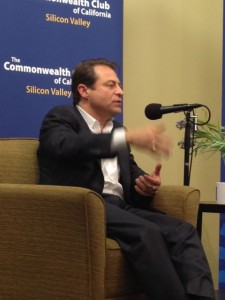 “We are going back to power of the people. We are empowering the people.”

“Governmental structures can’t cope with the rate of change.”

“We are going to be living in a very dynamic time.”

“How do we create a life of possibility?”

[That is, having a GPS or clock in the phone rather than a separate device.]

“Stuff is becoming cheaper and cheaper.”

“That’s my answer to that question.”

“Are we missing out on ways to make the government work well?”

“Where do you allow for risk-taking behavior?”

“Governments and large corporations can’t take big risks like that.”

“I don’t want to be critical here.”

“The whole premise of the book is that we are moving into a world where 3 billion people are empowered.”

“Tap into the cognitive surplus.”

[Depends on if you work to invent it!]

“We are going to be taking all this data and making it open source.”

“We are just at the very very beginning of understanding life.”

“Should we be doing more to redistribute what we already have? I thought about this for a long period of time.”

“It’s OK if they don’t have as much as us, if they have their basic needs met.”

“What could possibly go wrong?'”

“How scared should we be?”

“We talk a lot about the dangers of the exponential technologies.”

“This next decade _is_ the decade of biotech.”

“The tools to do that are becoming more and more prevalent.”

“Of course we should be concerned about these things. ”

“If you look at the actual ratio of good to evil, it’s thousands to one.”

“It’s been years since I’ve seen the world impacted by malware attacks.”

“We see danger far better than solutions, but ultimately we come up with the solutions.”

“It’s a danger we should be aware of, but there’s no way to stop the progress of technology!”

“I take much more interest in helping the smartest people in the world work on how to use that technology for good.”

“I understand it but I don’t believe it.”

“It was never those animal’s and plant’s purpose to be our most nutritious food source.”

“We have the potential to create foods that are far more efficient at converting the energy of the sun into the most nutritious proteins for us to eat.”

“There really have not been any fatalities from GM foods, but I can tell you of the lives saved.”

“It’s not clear they have technical solutions.”

“Perhaps it is overly optimistic. But I would tend to make the investment in technology rather than government policy.”

“People feeling like there is nothing we can do is not the right answer.”

“Innovation comes out of right-field. It comes with a person outside the field coming up with a breakthrough.”

“The only way to capture CO2 is to make it in their economic best interest.”

“Why wouldn’t you want to make more money?”

“We take ideas from everywhere.”

“Where are there world problems that there are not market solutions?”

“We look for people willing to innovate in this different way.”

“We will all have to reinvent ourselves numerous times in the coming decades.”

“We like waking up and having the world be the same as when we went to sleep.”

“We are resistant to change.”

“When these technologies allow us to save time, we adopt that.”

“We are going to have a lot of societal change, a lot of strife.”

“Society is going to struggle for the rate of change.”

“Everything we value on this planet is infinite in space.”

“We are in the process of becoming a meta-intelligence.”

“Paint me as the optimist. I have great high-hopes for humanity.”

“What specific threats do you see that could derail us from the positive trend?”

“I want to be a statistician rather than a humanist, so give me that a for a second.”

“One of my goals is to create a place where we aggregate evidence for abundance.”

“We don’t have to keep complaining about problems, we can go out there and solve them.”

“How do we empower people to stop complaining and say, ‘Screw it, I’m going to go out there and solve it!'” 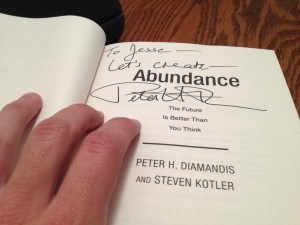