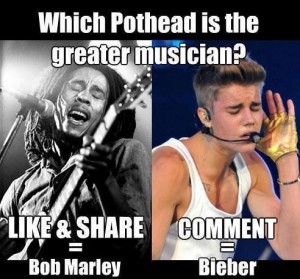 Interesting that “Pothead” is capitalized, too, perhaps to make it pop more, where the words “Which Pothead greater” are clustered, providing extremely fast emotional response, especially since Bob Marley is directly under that phrase.

Also, “Bieber” is inherently more difficult to spell and process than “Bob Marley”, further increasing the spread of the concept.

Another basic strategy used here is the ease of replication: Liking and Sharing are easier to do. Commenting takes time, whereas Liking can happen in a split second.

The action of Liking (on Facebook) shows up in other people’s feeds with your name saying you Liked it. Sharing directly posts it on your timeline, with a further increased spread.

Commenting adds little to the potency of the meme, because it doesn’t tell your friends that you liked the picture. They then have less of an emotional response to Like it themselves.