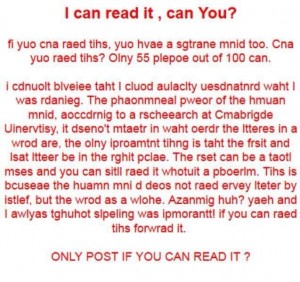 This is an interesting meme.

Mixed letters being able to be processed remarkably easily by the brain is an old concept. Yet, it’s still very counter-intuitive at first.

The nice surprise that you can read this makes it more likely you’ll share the meme and give the pleasure to others.

The line about only 55 out of 100 being able to read it is probably false. Most people can probably read it. I say this because I’ve seen this meme for years and have never seen that tidbit tacked on before.

The number 55 out of 100 is interesting. You don’t want it to be too low, because it will feel artificially low, but too high and the spread-rate is lessened because people don’t feel as special. So there is also the element of people wanting the subtle pleasure of considering themselves better than their friends.

Interesting that the last line “ONLY POST IF YOU CAN READ IT ?” is written by itself in all caps, in short words that do not have mixed letters. The question mark is an interesting evolutionary tactic, too, because it prompts the reader to ask the question “Can I read it?”. If the answer is “yes” (which is probably usually is), then a slight barrier has been overcome and so hitting “Share” comes more easily.

In the same way, the first line “I can read it , can You?” has an interesting comma distortion, putting spaces on both sides. This may make it easier for people to read quickly, while also lowering the barrier of entry for people that aren’t very good typists. That is, someone that makes typos like this a lot feels more at ease reading it.

The capitalized “You” points a direct finger at the reader, likely prompting a visceral one-upmanship. The reader of the picture immediately wants to show they can do the requested task. This makes it more likely for them to read the picture.