Breaking Down the Standard Model 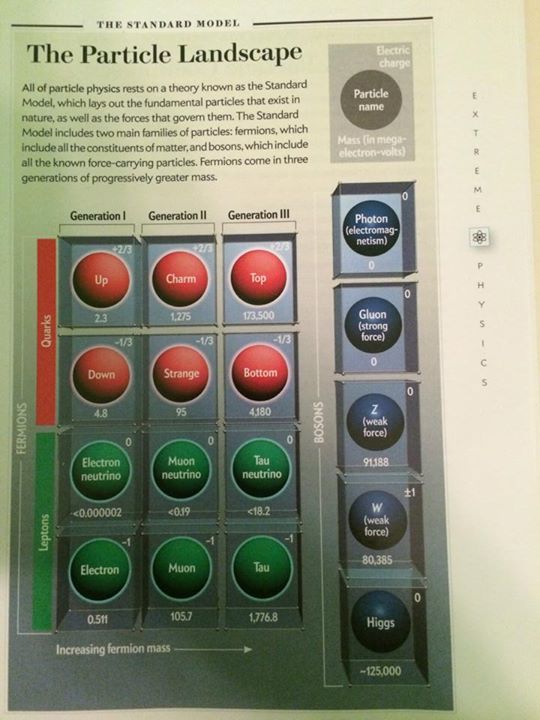 Atoms are made of protons, electrons, and sometimes neutrons.

A proton has a positive electric charge. A neutron is neutral.

Protons and neutrons are in the nucleus of the atom.

Surrounding the nucleus is an electron, one for every proton. This makes the overall charge of the atom neutral.

Neutrinos are very, very small particles that barely interact with matter. They pass right through most things. We don’t know much about how they work, yet.

Those are the particles. There are also forces.

There are four fundamental forces: electromagnetism, gravity, and the strong and weak force.

Electromagnetism is communicated using the photon. This is a particle of light. Electricity and magnetism use the photon. We see a very small slice of all the frequencies the particle can travel at. Radio waves, microwaves, and X-rays are all particles of light.

Gravity comes from the Higgs boson. It’s what gives quarks, electrons, electron neutrinos, and weak force bosons their mass. The Higgs boson slows down the particles and makes them heavy. The Higgs boson was recently confirmed to exist in July 2012, using the Large Hadron Collider.

These particles are Generation 1 of the table. Generation 2 and 3 follow the same rules but are not seen ordinarily. They are seen when particle accelerators smash protons together. These protons break apart and sometimes show Generation 2 and 3, like the Charm and Top quarks, Strange and Bottom quarks, the Muon neutrino and Tau neutrino, and the Muon and Tau.

Almost all matter in the universe is made up of the Up and Down quarks and the electron.

This whole model of particle physics is called the Standard Model.

This is quantum physics.